He was signed on a short-term loan for Bayern under the club’s former manager Jürgen Klinsmann. The California-born man only made six appearances for Bayern in his career, with all appearances made while coming off the bench. He was then sent back to his parent club Los Angeles Galaxy after the expiration of the short-term loan deal.
END_OF_DOCUMENT_TOKEN_TO_BE_REPLACED

Landon Donovan might have retired from the field but he has taken on the coaching and mentoring stance as he is currently involved with the national team of U-16s of the US. The team is on a training camp for five days and one of the special members is Landon who is acting as a coach of East squad. The camp brings about 59 players from the main regions of US soccer spanning west, central and east. They are playing the youth squads as well as intra-squad games.

Donovan is a celebrity here, more so after the MLS MVP award was named in his honor. He has about 136 assists and 144 goals for his playing career. He was also associated with the San Jose earthquake team and with Galaxy. As per his position with the national team of US men, he stood second on the caps list of all time that included 157 players. He tied in position with Dempsey when it came to goals and behind the achievements of Cobi Jones. He has since then dabbled in coaching for the youth as he led the homegrown team of MLS in the years 2015, 2016.
END_OF_DOCUMENT_TOKEN_TO_BE_REPLACED

USA legend Landon Donovan is football royalty with his achievements during his club and national team career. The 36-year-old made a surprise decision to play indoor football with the San Diego Sockers of the MASL in January and had a successful stint with the club.

The club went on an astonishing run of 23 straight wins before suffering a last-minute defeat in overtime to the Monterrey flash in the Western Conference finals.  Speaking after the game Donovan decline talks of him coming back to the league in the future.
END_OF_DOCUMENT_TOKEN_TO_BE_REPLACED

Donovan said he is of the opinion that a potential North American league that features football clubs from both the United States and Mexico would be of great benefits for the sport in both countries.
END_OF_DOCUMENT_TOKEN_TO_BE_REPLACED

His first thoughts on World Cup 2018 were asked upon which he said that the World Cup is different for him mainly due to two factors. The first one is that this time U.S is not there which he is not too happy about as it has always been there in the World Cup. And secondly, it is for the first time after 1998 that he had an opportunity to watch the World Cup match like a fan instead of a player.
END_OF_DOCUMENT_TOKEN_TO_BE_REPLACED

Recently the player gave an interview explaining how Leon were able to get him to overturn his retirement plans. He explained that he was at home and was happy with retirement when his agent called him. Richard Motzkin asked if he wanted to remotely return to the game but he straight out denied. END_OF_DOCUMENT_TOKEN_TO_BE_REPLACED

The 34-year-old midfielder came out of retirement to help the LA Galaxy in 2016, but he will now close the door on his storied playing career. 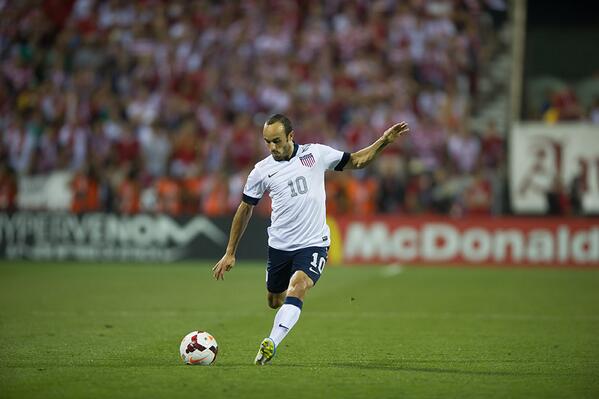 Landon Donovan is once again retiring from soccer after returning to the LA Galaxy for the final stretch of the 2016 MLS season.
END_OF_DOCUMENT_TOKEN_TO_BE_REPLACED